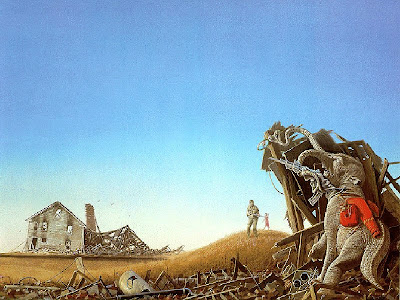 Planet of Origin: A planet orbiting Alpha Centauri
Fithp resemble man-sized, quadrupedal elephants with multiple trunks. Being herd creatures, they do not understand the concept of diplomatic compromise… you either dominate or you submit, then fighting ceased and the losers were incorporated into the winning herd.
They possess more advanced technology than humans, but have developed none of it themselves. In the distant past on their planet, another species was dominant, with the Fithp existing as animals, perhaps even as pets. This predecessor species badly damaged the environment, rendering themselves and many other species extinct, but left behind their knowledge inscribed on large stone cubes (called Thuktunthp, plural of Thuktun in the Fithp language), from which the Fithp have gained their technology. The study of Thuktun is the only science the Fithp possess. The Fithp are armed with a technology that is superior rather than incomprehensible: laser cannon, projectile rifles, controlled meteorite strikes to bombard surface targets, lightcraft surface-to-orbit shuttles the size of warships, etc. Their space-faring technology is based around a part generationnal part sleeper spacecraft driven by a Bussard ramjet put together circa 1919 to answer to threats of possible extinction due to the long-term effects of biological weapons, a group of high-ranking Fithp were selected by wager to escape to the stars.Leaving their homeworld, the Fithp wanted to conquer Earth and become the dominant species on the planet.
Source: Footfall novel by Larry Niven and Jerry Pournelle.
Publié par Unknown à 21:15